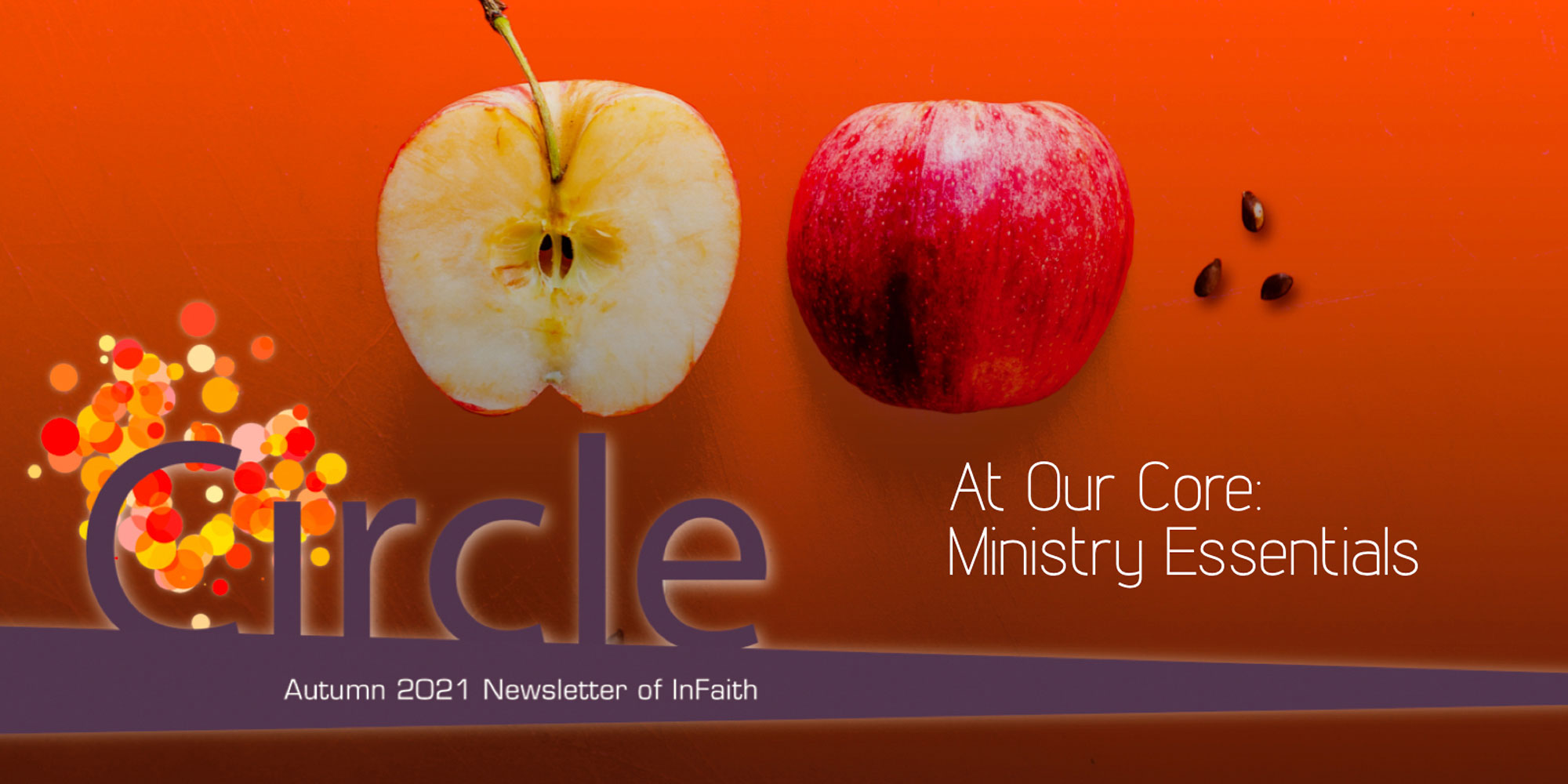 InFaith is built on the Word of God and our personal faith in Jesus Christ. We hold to the great foundational truths of the historic Christian faith held in common by like-minded evangelical Christians with whom we share the mission mandate. The following ministry essentials form some of the core values that help to define how we approach ministry.

Passion for God: We love God and desire to have others come into a personal relationship with the Savior. We value each person as an individual who has a need to recognize his or her lostness and need for a Savior. We believe the Scriptures are the primary way God speaks to us.

Hassen, a 48-year-old Lebanese Muslim in the Detroit area, was struggling with depression, his home life was rocky, and he had attempted suicide a few months before. Through a friend he heard about the suicide ministry that Kris Cain leads, and he started attending the meetings. He was encouraged by the stories others shared about true peace and how Jesus carried them through their toughest moments. Hassen had some long phone conversations with Kris, and near the end of May, he gave his life to Christ during the prayer time at the suicide ministry! “Heaven rejoiced that night as he stepped from death into life,” says Kris, “and from feeling alone to knowing the hope and peace that can be found in knowing the Savior!”

Focused: We are about connecting people with relevant ministry in the United States. We believe that people transformed by Jesus will be a redemptive community, causing winds of revival within our nation’s borders.

“There is an emphasis [in the Christian community] on going overseas. But we’ve seen that, tragically, in our own communities there are entire unreached people groups. We have multiple communities where we minister where we are the only Christian presence at all. We both tried to get involved in overseas mission organizations, only to find out that the ministry God was calling us to, setting on our hearts, and preparing us for was right in the communities where we already live, where we’ve grown up.”

-Dean Dilger, who serves along with his wife, Christiana, on the central coast of California

Spiritual Relationship: We want to be people who come alongside individuals and help them understand what it means to be a Christ-follower. We affirm each person’s giftedness and will help others use their gifts in Kingdom service.

While doing a deep study about the foundations of the faith with seven Oklahoma teenagers, Kerri Brown began discussing with them the desire to go on a mission trip to live out their faith by serving others. They prayed about where God would have them go and were led to put on a VBS for a Haitian church in Florida. “All of my kids come from families that rely on government assistance,” Kerri says, “so we knew that not much of this money [for the trip] would come from home. The kids, however, were not discouraged. They had faith that God would provide! And they weren't afraid to work hard, either!” They did yard work and helped maintain apartments. They helped Kerri run a horsemanship program for the elementary school. They turned a small space attached to a store into a snack shack and sold hot dogs, snow cones, and drinks. After weeks of working hard in the blistering sun, they were still more than $1000 short. “Still, their faith didn't waiver,” Kerri says. “We just kept praying.” They visited two different churches to do a skit and share about their plans. A week before they were supposed to leave, the donations came rolling in, and they ended up with nearly $1000 more than they had asked for.

Catalyst for Community: We are a people who value the church. We seek to bring people together for worship, community, teaching, and ministry.

Forty-one members of our field staff are actively involved in church planting and pastoral ministries. These churches look as different as the communities they’re in: from multi-ethnic urban churches who are bringing together multiple congregations under one roof, to circuit-style preachers who minster each week in three or more small churches with eight to twelve people in attendance. God gathers his people together in ways that are suited for the location.

Ears that Hear: As we talk to God in prayer, we listen carefully for His voice as revealed in Scripture and through the work of the Spirit. We are a people who are committed to asking God to reveal His will to us through careful and consistent corporate and private prayer.

“One of the sweetest spaces for me in discipleship is when I’ve been praying for a long time over [the people I’m discipling]. We’ve been talking, and studying the Word, and they’re hearing me pray. Often, they don’t have confidence to pray at the beginning. But when they begin really sinking into their walk with God, almost every time there’s a moment when I notice that we’ve shifted from ‘This is a spiritual kid that I’m pouring into,’ to ‘This is my sister, side-by-side, and now she’s praying over me with strength and power to the point where I’m crying because of her prayers.’ That’s the point – those are the moments that I live for in discipleship.”

Peacemakers: While holding tightly to our statement of faith, we seek to focus on that which brings unity and common purpose. We refrain from controversy and divisive issues that cause strife, choosing to center on Jesus and His redemptive work.

“It’s not about us. We have so many weaknesses and reasons why we shouldn’t be doing this. But God has called us to this. And when He calls us, He enables us. And we are blown away with what He does!”

– Vonnie Pratt, who along with her husband, Larry, ministers in rural Washington through puppets, music, and pulpit supply

Relevance: As culture changes, we will adjust our methods to be relevant to whomever God brings our way. We are cognizant of our rich history, which we see as a foundation for the future. Like our founders, we are pioneers. We seek relevance through evaluation of our methods as we teach the unchanging Word of God to an ever-changing culture.

Judy Wiedemeier uses horses to reach young people in north-central Iowa. A girl with autism attended one of the equine camps. She was having trouble connecting with the other girls, but she immediately bonded with the horse assigned to her. As she brushed it, she started hugging and talking with the horse more and more. As camp continued, she started to interact with the other girls more, and by the end of camp she came up and gave Judy a big hug and thanked her. The girl’s mother was there and had tears in her eyes because her daughter had never hugged anyone but family before. “That horse was the bridge for her,” Judy says. “She could open up to him, and he was safe, and then she tried opening up to others. God uses horses to be that connection that maybe sometimes the kids can’t find otherwise.”

Clean Hearts: We are a broken people. When we make mistakes, we respond graciously, asking for and giving forgiveness. We come to the cross as equals, people who have a sinful nature and have experienced the miracle of grace from our Savior.

Bud Lamb works with men and young pastors around the country who are struggling, drifting, or need to have someone to listen to them so they can move forward with their lives. One man he’s currently working with is going through a divorce and has an addiction to pornography. “I’m familiar with both of those,” Bud says. “I’ve been divorced, and I understand the sexual stuff that men struggle with.” This man lives in a remote community of about 400 people, about an hour away from a big city, so he and Bud talk at 6:30 a.m. every Thursday morning as he’s driving to work.

Community to Each Other: We are a group of Christ-followers who intentionally live out what it means to be the family of God, submitting to each other, willingly accountable, and genuinely caring for those who are called to our common work.

“I love InFaith. I love being a part of this community. Trying to go it alone if you have a ministry idea you want to do can seem so daunting and overwhelming. But being a part of the missional community of InFaith makes it seem more doable – you have support and people backing you up. That community has been very encouraging to me.”

– Marissa Bostick, who has started a pregnancy- and infant-loss ministry in Texas